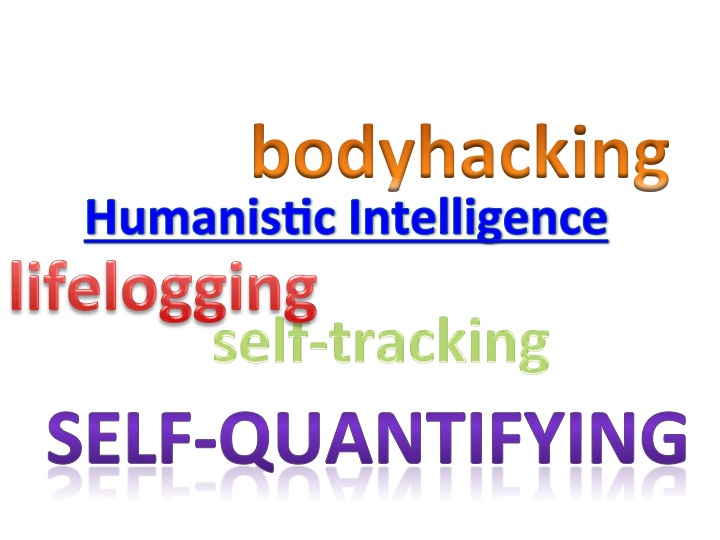 What Is in the Name

In simplest context, Quantified Self is recording – one’s own – not anyone else’s or any group’s – life. Observations can include any variety of measurements and assessments. Wearables track body functions of activity, rest, working out or physical records of pulse, temperature, respiration. Recording eating and drinking consumption is another. Evaluating mental states such as moods or emotions or happiness is yet another aspect. What books you read, movies you watch, etc.  The list could be exhausting.  The list of resources for the quantified self and its variations is growing as well.

Almost everything we do generates data.- Gary Wolf

Quantified Self evolving:   term, methods, and even a movement

Self tracking of itself has been around since the first woman wanted to predict her upcoming cycle and the life decisions thereof.  Balancing your check book is a form of quantifying your actions as well.  The term “quantified self” though goes back to the 1970s, basically when applying sensors and computing entered the equation.

The nascent body sensing apparati though took some time to develop.

In 2007 Wired Magazine editors Gary Wolf and Kevin Kelly proposed the “quantified self” as “a collaboration of users and tool makers who share an interest in self knowledge through self-tracking.”

Going back to monthly cycles and balancing checkbooks examples, self-tracking isn’t a new process. The Quantified Self method though incorporates technology as appropriate for the Information Age.  That’s the new part.

Since Gary Wolf’s 2010 Ted Talk the variety and capability of sensors has increased greatly. The Internet of Things (IoT) platform bleeds into QS as well. The results are increasing volumes, variety and velocity of data – now we’re talking Big Data!

You might know what stressors increase blood pressure, but how often does that happen? How much of an increase is significant? What times or conditions reduce your blood pressure?

Now an easy–to-wear sensor can monitor blood pressure continuously and transmit that data to storage. Instead of discrete, hit-or-miss blood pressure measurements, Big Data captures a continuous stream of readings from which doctors or data scientists can observe patterns or predictability.

Rinse and repeat for any habit or activity or condition you want to observe. Sensors, apps, websites, products, services abound in which to quantify your life. See the list below for a list of what available now.  Or check out the QS site for tools.

Most major cities in the US and around the world host regular QS meetings, perhaps not monthly but often enough to share experiences.

Our aim is to help people get meaning out of their personal data. – QS website

Quantified Self the group began hosting annual QS conferences in 2011 in San Francisco and other countries the year following the Ted talk. The next upcoming conference is June 18-20, 2015. The IoT is in the same location the following week at the O’Reilly SOLID conference.

Today’s Quantified Self methodology is a Big Data capability.  It is volume, variety and velocity of information that only recently could be captured AND comprehended.

As for WHY Quantified Self?  Because we can?  Better sleep, better health, or a better life?  Big Data doesn’t have the answers, just awareness in the data.  You still decide what a better life is.

Further information on Quantified Self

About Quantified Self … itself.  OR …

From Mark Moschel’s The Beginner’s Guide to Quantified Self (Plus, a List of the Best Personal Data Tools Out There)

The lists below include some, but not all devices. Be sure to do your research when picking the best device for you.

To start: Use pen and paper or a digital spreadsheet (Google Drive or Excel).

My recommendation: AskMeEvery – Simple tracking of meaningful data via email or text

My recommendation: Fitbit. They are one of the few activity tracking companies that promote an open API.