Attaching data to location is the basics of science and application of geospatial information and it is one of the oldest platforms of data accumulation. Since That Guy claimed ownership of That Land, there has been some documentation of specific reference points to plot out control. That system of record has increased in sophistication over the millennia. Today’s land surveys would surely have impressed George Washington, and that’s not just because it utilizes satellites and Global Positioning System (GPS). Government utilizes Geographic Information Systems like this. 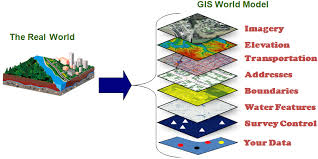 Urban planning is only one of today’s many Geospatial Information applications that provide decision making capability for disease control, global participation, environmental monitoring, and wildlife management to name a few.

Big Data doesn’t have to be all high tech or even high speed though.

Even in the “dark” of the Congo, with limited mobile connection and no electricity, geospatial information is solving a cultural and economic problem.

Citizen science is the involvement of non-formally trained participants in science experiments. Citizen scientists, regardless of expertise, record observations or perform experiments toward a project. Considered by some as crowd-sourcing surveillance, citizen scientists date back to the “gentleman” scientist and include such notables as Sir Isaac Newton, Benjamin Franklin and Charles Darwin. Some debate exists as to the validity of the citizen scientist; however, the most beneficial application appears to be combining the talent and expertise of formal scientists with those directly enthusiastic about or engaged in the research.

With that thought, what better team than an indigenous population and the scientists that want to help preserve their culture? Anthropologist Jerome Lewis of the University College London (UCL) is part of the team of Extreme Citizen Science (ExCiteS) research group assisting the Mbendjele, a nonliterate group of native hunting and gathering people living in the Republic of the Congo. Local logging company Congolaise Industrielle des Bois, certified for its environmentally and socially sustainable forestry operations, wants to utilize land inhabited by the Mbendjele. The Mbengjele don’t believe in “owning” land, but instead believe the forest to be an extension of them. ExCiteS has developed a solution for the Mbendjele and Congolaise Industrielle to each pursue their interests.

An Mbendjele love the forest as he loves his own body.” – Lewis

So … how do you protect the trees and plants that are spiritually and medically significant to these indigenous people when they don’t claim rights to the land that holds them?

The Mbendjele have specific trees and plants that are integral to their beliefs and way of life. Instead of claiming land as protected, with the help of ECS they identify the plant life that is medically and spiritually important to them. The forestry operations work around that identification.

How is that done if the Mbendjele are illiterate?

Most Mbendjele had never seen a cell phone prior to the project. They don’t have mobile devices for communication but they have been given them to use in identifying the specific location of trees and plants important to them. They take them to locate geotag those plants. Because they don’t read, they simply click on icons of their own hand drawn pictures to the plants, which tags them with GPS.  The method is an open-source Android app called Sapelli, named after a Congolese mahogany-like tree that is a point of conflict between local communities and loggers.

How is that done if they have no power, not even solar?

The Mbendjele have no electricity and solar power is limited because of the thick jungle canopy. In order to be able to charge the phones, they needed another solution. Thanks go to Hatsuden-Nabe cooking pots from Japanese TEX New Energy Corporation. When the pots are heated over an open fire, the heat is transformed into electricity to charge cell batteries. The Sapelli app is also designed to only transfer very small packets of information in order to conserve power, as well as adapt to the limited cell coverage.

The Sapelli app and its collected data are open source. The capability is welcome to be replicated or utilized for other programs or in totally different direction. ExCiteS is also using the Sapelli app in similar context with an indigenous tribe in Brazil. The app is also used in another context in the Congo and Brazil for documenting poaching and illegal operations.

In consideration of the lack of power and connectivity, it is amazing how it can be used in seemingly any corner of the world for a breadth of mission possibilities. Those that know the land form and function the most intimately can provide the most poignant data points from their perspective. The information they collect can be used immediately as well as continue to germinate for other projects yet to be imagined or deployed. Also, those data points that are significant to those right there can be examined and understood in perspective from regional and even global perspective.

This is an important Big Data tenet. Data collection doesn’t exist for one purpose, one perspective, one dimension of space or time. Because of the ability to store and manipulate ever greater volume, velocity and variety of data, we will continue to find signal in the noise.